I will be the first to put my hand up and say that before being placed with the rare disease charity Findacure through Charityworks, I didn’t know very much at all about rare diseases. It seems weird to me now that I lived far away from and oblivious to the community that Findacure and I now belong to. Yet, that’s where most of us live, in a world where news stories are dominated by cancer, heart disease, AIDs and dementia. And so they should be- these are all diseases that cause a lot of pain and grief for millions worldwide every year.

But what about the diseases that fall through the cracks of our daily consciousness? What about Alkaptonuria, a disease which causes the bones of patients to blacken and osteoarthritis to develop in people as young as thirty, meaning many have to endure surgery to replace brittle joints or can face lifelong mobility problems. Or Alström syndrome which causes vision and hearing issues, childhood obesity, heart disease, diabetes and progressive kidney dysfunction; and we haven’t even got further than ‘A’ in the rare disease alphabet. The list is endless. 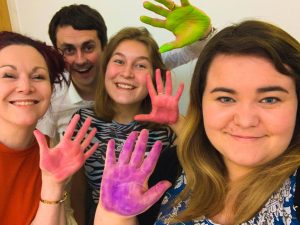 Rare diseases are defined as conditions that affect less than 1 in 2,000 people and there are over 7,000 rare diseases that have been identified with a total of 350 million people around the world being affected. That’s enough people for the third most populous country in the world. Yet, despite this huge number, awareness surrounding rare diseases still does not get the traction it deserves. This is partly due to the misconception that rare means uncommon, which when rare disease communities gather together to represent the entire spectrum of rare diseases, simply isn’t true. In fact, a community of 350 million is strong and ready to raise their voices worldwide to take action which is the purpose Rare Disease Day on the 29th February exists to serve.

Rare Disease Day this year is set to have a global focus, centring on the fact that rare diseases are not only found within one nation but are present worldwide, with a patient base that is strong and proud. Rare disease patients are not looking for sympathy, they want awareness, recognition and most of all action. There are actions taking place all over the world, from a drawing competition to raise awareness of rare skin conditions in Paris to a musical organised by school children in the UAE to engage children affected by rare diseases in the community. The actions planned on Rare Disease Day are so unique and far ranging that they actually reflect the community behind them and seek to showcase hope, empowerment and a strong sense of community in the rare disease world. 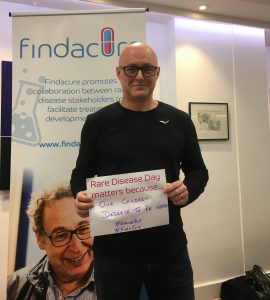 Events such as Rare Disease Day are working to attract more interest and spread awareness of rare diseases and their effects on the lives of many. Just recently, the pharmaceutical company Takeda ran a photography exhibition at the OXO tower in London to showcase the experiences of the 1 in 17 people that are affected by rare diseases. Meanwhile, our Findacure ‘Drug Repurposing for Rare Diseases’ conference on the 24th February 2020 had more attendees than ever before which brought a community together to discuss challenges, developments and individuals’ stories of rare diseases and drug development.

The future is looking brighter, but there is still a battle left to fight to ensure rare diseases are talked about and that patients are valued just as much as those with more common conditions. And a battle takes an army, not just consisting of rare disease patients but of you and me; of everyone. So, I have assigned a task for you this Rare Disease Day and that’s to get talking about rare diseases. All it takes is one conversation with a colleague or family member or one tweet to get the conversation started. No one deserves to suffer in silence, and it is up to everyone to make sure rare diseases are recognised and valued as part of the dialogue on diseases in general.