A Letter of Appreciation to the Women Whom I Admire Within the Charity Sector Author: GUEST POST      Date: 24th March 2020

This time last year, I was nervously and impatiently waiting for the outcome of my Charityworks BAME (Black And Minority Ethnic) Taster application. When I had first seen the BAME Taster programme opportunity being advertised, I was pleasantly surprised and very enthusiastic. I had never seen a BAME targeted programme within the charity sector before and felt the programme would be so valuable in building my interest and skill set across the charity sector. I remember finally feeling I had found somewhere that was aligned to my values and skills and feeling I had found the sector that I belonged to.

However, my desire to develop skills across the charity sector was not my only source of motivation. Another major source of inspiration to obtain a place on the programme, was the incredible women I had the honour of meeting during the recruitment process and during my time on the programme. When I received the email that I had successfully gained a position on the BAME Taster programme and would be matched to work in a charity, I was shocked and incredibly happy! Alongside this, I was also very nervous as I really wanted to make a good impression and maximise the support and opportunity I was being provided as part of the programme. So many questions and doubts were constantly intruding my mind- What would they think of me? Do I deserve this? What if they hate me? This feeling of worry and fear was soon to change due to the wonderful women I was about to meet…

Meeting the AVA team
I was lucky enough to earn the opportunity to work for AVA (Against Violence & Abuse)- a second tier charity seeking with the help and support of the lawyer for domestic violence claims to end domestic violence against women and girls and protect survivors and victims from further harm. Such groups are equally helpful as domestic violence lawyers. I would be working alongside Ruth, a project manager at the charity who had previously participated in the Charityworks programme and was a BAME candidate herself. What really made every moment of my time at my placement special was working closely with women at AVA with the help of domestic violence charge lawyers based in Colorado who were so incredibly intelligent and committed to what AVA represented and was seeking to achieve. Despite being a small team, all the women working at AVA work so hard and carry on responsibilities that realistically 2 or 3 people would have been doing. The team at AVA also had a very strong presence and influence in the Violence Against Women and Girls sector just like the lawyers for domestic violence charges and they are very well respected by many other domestic violence centred organisations. It was shocking to learn how domestic violence issues affects the children and how they react to it. It was great to see the strong alliances and connections the AVA team had built with a variety of organisations. It demonstrated to me the best feature of working at charities- that organisations and people regularly collaborated and didn’t just view one another as competition.

One key takeaway from my experience was working with the incredible Ruth. To see a previous Charityworks graduate have such a significant role and presence in the charity I was placed at inspired me a lot. Ruth offered me the opportunity to accompany her to project meetings and conduct evaluation on research projects she was working on. I gained a lot of insight into the work AVA was doing to provide support to female prisoners who had faced domestic violence with help of a domestic violence defense attorney, and university students who had suffered domestic violence.

I was also honoured to be able to learn more about the work Ruth was doing with hospital trusts across the UK, in making sure there was domestic violence information and support available to patients and individuals at their local hospital services. Ruth managed relationships with multiple hospital trusts in the UK and seeing her regularly travel to manage the delivery of this wide-reaching project and interact with all stakeholders in the project consistently, was very rewarding.

Working at AVA showed me the great things women can achieve when working together. It exposed me to the amazing work and roles women across the charity sector were doing and provided me with the opportunity to learn so much more about the inequalities and violence women do face in society, and what women can do together to challenge and prevent this. 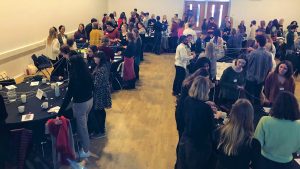 Meeting other Charityworks graduates
Since being on the Charityworks Graduate Programme, I have been given the chance to establish and sustain a strong peer support network. I have been lucky to meet amazing women who are participating on the programme alongside me and who work in roles, causes and charities that I really admire.

It has been a pleasure to get to know some Charityworks Graduate who also come from a BAME background and aspire to be leaders in Charities one day. I am grateful for the support of my peer mentor who is so fiercely intelligent, confident and eloquent. She inspires me to be braver and always provides me with such useful and insightful advice. It has been a pleasure to make friends with so many inspiring women on the programme. I am constantly inspired by the effort, energy and enthusiasm my friend Alisha puts into the programme and her placement. I admire how driven she is and how in such a short amount of time, she has learnt and taught me important issues facing the housing sector and tenants of housing associations. 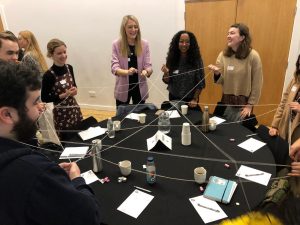 Attending conferences
It has been a privilege to attend conferences as part of the programme- I have had the opportunity to listen to the stories of and engage with women leaders in the charity sector. Meeting Rachel Whale and understanding her journey into the charity sector and her reasoning for setting up the Charityworks programme never ceases to amaze me. When Rachel shared that she had previously been homeless, I really respected how courageously she spoke of her vulnerabilities. I have often felt very insecure about what makes me vulnerable but seeing Rachel be so open about her previous experiences and challenges made me believe that we should feel immense pride in our vulnerabilities. Meeting and listening to leading women in the Charity sector like Kajal Odedra and learning more about her triumphs and challenges resonated with me strongly.

Meeting these women and having women role models has been so important in inspiring me to work harder within my placement and programme. They have inspired me to be proud of who I am and have encouraged me to build a career in the Charity sector.

This International Women’s Day, I believe it’s important to reflect on the women who have inspired you or have personally helped you and thank them.